It's all fun and games until the naked German passes out on you!

Back in April of 2004, I visited my good friend J in Frankfurt. This was way before I had any notions that I’d be living in Germany and as it turns out, we now live 150km apart down the A3 (one of the many speed free autobahns… Driving 160 km/h plus *legally* on a highway will never get old…)


During my visit, J was a great hostess and we were able to tour around the Rhine and head to Paris for a few days. One of the places she took me to was a German sauna. Honestly, I can’t remember how it was described to me anymore, but even if I did, nothing would have prepared me for what I was about to experience…

A german sauna, therme, bath is usually attached to a large swimming facility. In my limited experience with them, there seems to be a “family” side and an “adult only” option. The family side usually has waterslides, hot tubs, swimming pools and would be like most similar facilities in North America. The adult side however, is another story.

The adult side usually has steam baths, saunas, whirlpools and the like, but the big difference is, you’re naked. I’m far from conservative and have been to Vancouver’s nude beach usually once per summer. But the thought of casually hanging out with my friend and her boyfriend- naked, seemed a bit disconcerting. But when in rome…
So off we went, disrobed and I tried really hard not to look anywhere below eye level when maintaining conversation. The sauna was cool and there were dozens of hot tubs, steam baths and sauna buildings. Each sauna was in a free standing building outside and would have certain let’s call them “aromatherapy events” at certain times. On a board outside the sauna, a time and scent were advertised. We went into pine I believe. The details are fuzzy because what happened afterwards is what stays in my memory.

A “saunamaster” comes in at the set time and runs the show. Literally. A little tanned man walks into the sauna wearing only a towel. He proceeds to mention what will be happening in the next 20 minutes. In German of course, so I have no clue about any of it. After getting everyone “hyped” up if you will, he starts. He sprays some oil onto the rocks and then some water. He then proceeds to whip off his towel and whirl it above his head to circulate the hot, scented air. With me, there are about 40 hot, sweaty (and largely overweight) Germans. Since I’m a wimp for any extreme temperatures, about ¾ of the way thru, I have to excuse myself because I feel like I’m gonna pass out. My friends tell me that I would be breaking the “rule” of the sauna and I can’t do that. I try to sweat it out (literally) for a few more minutes but I just can’t. I leave the sauna and will deal with the repercussions of 40 hot, sweaty, naked, overweight Germans later.
I sit on the bench outside, wait for my friends and try to cool off. As I left the sauna, an older man followed me out. He sat on the bench beside me. He was maybe mid 50’s, skinny oh and naked. A few minutes into my cool off, skinny naked man faints on me. Right. On. My. Lap. There I sit. Outside the sauna. In Germany. Not knowing. A word. Of German. With a passed out naked man on my lap. Great. Just Great. Now What? Imagine the look of surprise on my friends faces when they saw me sitting there. Thankfully, sauna master guy was behind them and came and rescued me. Thankfully, a passed out man is pretty self explanatory and I didn’t have to say anything. And my friends and I? Well, the jokes are endless, but we now say “It’s all fun and games until the naked German man passes out on you”.
Posted by Katherine Correia at 3:41 AM 1 comment:

There are some things that some people inexplicable seem to have over other people.  Take for instance, one of my childhood friends, struck by lightning twice already or the girl I know whose boyfriend has worn a good amount of money on the lottery three times.  Over the years, I've discovered my "thing".  Well, 2 things actually.  The first, a friend of mine nicknamed, parkma.  I can pretty much go anywhere and find a parking spot right where I need to.  Usually, with time still left on the meter.  It happens so often, that if I actually have to drive around the block to find a spot, I'm annoyed.  The second, is equally random, but with just as much of a success rate.

The amount of people that I've dated for 3 months or longer since I was 18 I can count on one hand.  Well, ok.  Maybe 2.  There have been many who by my choice or theirs, never made it to 3 months.  But 3 months seem to be the tipping point.  You see, the majority of people who I've dated for 3 months or more have gone on to marry the next girl they dated after me.  About 4 ex boyfriends ago, I noticed this trend.  About 3 ex boyfriends ago, it stopped being funny.  About 3 ex boyfriends ago, it became so ironic and obvious that one of my best friends suggested I turn it into a business (a tempting thought, but like some of my other great ideas, I never followed through)

It started with P, my high school sweetheart and until recently, the best guy I ever dated.  The next girl he dated after me?  married. 2 kids.  After that, there was a several year "I'm in my 20's hiatus".  Then there was B.  Actually, I don't know if B ever married the girl after me, but I do know that his basement suite got ruined by a mudslide and tree (oops!)  Then came W.  Marriage. And last I heard, a kid.  The kicker was B.  He lived in the states and was married twice before. SWORE up and down that there would NEVER be a third.  A few months after our year together, came number 3.  And baby.  There's a couple of more examples too and most recently, C.  A few months with me, less than 6 months with a new girl and BAM. marriage.

It's not like I have found guys out there who are craving marriage.  I'd say most of them were neutral to opposed to marriage.  And don't get me wrong, I don't think there's anything special about my company that turns them onto marriage.  It just seems to be fluke.  That's happened more often than not!
Posted by Katherine Correia at 1:00 PM No comments:

2 years ago today, my marriage officially ended. Well, I mean by ended the man I married walked out. At the time, I had no clue how I was going to survive. Though I had managed to overcome a lot of challenges before, I thought everything was behind me and it was all smooth sailing. It was hands down one of the most devastating experiences of my life.

2 years later, I honestly forget I was married. I forget the anxiety I experienced in those first few weeks and months. The shame I felt for having a failed marriage and not "knowing better"
I've stopped worrying that more secrets will rear their ugly head and I can fully claim I'm over it and have been for at least a year.

What's amazing to me now though, is how much has changed in those 2 years. What I once thought of the lowest point in my life was hands down the best thing to have happened to me! Not only am I free of the narcissist jerk that was once consumed my life with his highs, lows and addictions but my life has truly taken off.

I look back on the past 2 years with awe. I've been to Thailand, chile, Argentina, china, Vietnam, Germany and backpacking thru the Yukon which alone has been a whirlwind. I've learned a lot about myself and relationships and have even found a healthy dose of self confidence.

As I sit here and type this from nurnberg, I'm thankful I was able to take advantage of the opportunity to live and work abroad, because had I still been married, I probably wouldn't have been able to.

It had taken me a lot to get down that aisle and when I did, I thought I knew what fate had in store for me. I was wrong, I couldn't have been more wrong. But I'm glad and thrilled to admit I was wrong.

In Canada, we just eat pancakes... 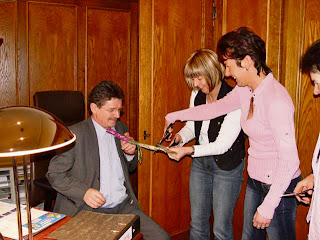 I have to be honest and say that I didn't know that Germany was still a (mostly) religious country.  Of course, I heard a lot of church bells during my visit but never really clued in to just how much religious holidays were celebrated.

As it happens, Ash Wednesday (or the start of lent) is this coming Wednesday.  If I remember correctly (never did pay much attention in catholic school....) this means you are supposed to give something up for six weeks until Easter.  But like all good catholics, before you give something up, you go out with a bang.  Hence, Carnival.  Or mardi gras etc...

While Louisiana has mardi gras with it's beads, alcohol and partying, Brazil has parades of samba dancers in crazy costumes and partying in the streets.  Well, Germany has it's own version.  And arguably, a little eccentric.

The next big celebration, is rosenmontag (or rose monday)  That day, there are huge parades with bands, floatds, candy, clowns and donuts.  I don't really get the last part, but I can attest to it.  I've seen more than one clown selling donuts.  I'm not sure what the donut and clown co-relation is and I haven't been able to find out.

All of this craziness (and donuts) ends on Ash Wednesday, when Germans go back to being their serious selves and are meant to give up something for lent for 6 weeks.  And to think? In Canada, we just eat pancakes....
Posted by Katherine Correia at 4:07 AM No comments: