It’s no secret that Switzerland, among other things, is famous for cheese. What is a secret though, is the variety of cheeses that there are.  Usually when you think “Swiss Cheese” you think the kind with the holes in it.  That would more likely be considered Emmenthaler cheese.   In fact, Switzerland has about 450 different varieties of cheese.

To say there is cheese everywhere is also not an understatement.  Once you leave the city, you practically run into cheese places.  Switzerland very much embraces the whole “eat local” movement, though here it’s not so much a movement but rather something they’ve always done.

Though I’m sure there are a few large scale cheese operations, the majority of cheese seems to be made by small independent farmers.  The cheese that I most often run into (quite literally) is alp cheese.   Alp cheese is a loose term to define a cheese that comes from the mountain.  In order for it to be called alp cheese, the milk has to come from cows grazing in the mountains and the cheese itself has to be made in the mountain.  As a result, the only “wildlife” you spot hiking is generally cows (or goats)

Of the cheese places I’ve run into, they also generally have a point of sale on the spot.  It’s usually a friendly sign on the side of the road and a fridge or cooler with the offerings.  Oh, and it’s unmanned.  I’ve mentioned before how trusting Switzerland is, but it’s still amazing to me, that in the year 2013, there are still people trusting enough to leave a box of cash along with the cheese.  Of the times I’ve bought cheese at the “self service” cheese shops (for lack of a better name) it’s not uncommon for there to be close to 100CHF in the cash box. The concept is simple: buy your cheese, pay for your cheese, make your own change.  So simple and trusting, yet it just wouldn’t fly in about 90% of the countries in this world! 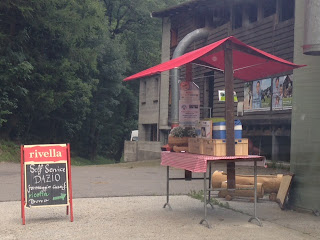 Posted by Katherine Correia at 2:51 AM No comments: