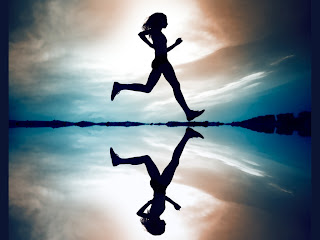 I don't run.   I don't run so much in fact, that my motto has always been "I'll only run if someone chases me".   It's not that I'm unfit, I've done boot camps, cross fit classes and hiked 140km thru Northern Canada a few years ago, by most definitions, I'm fairly fit.  But running has always felt like sheer torture.  I could give you 50 reasons of why I hated running: shin splints, tight hips and it just seems downright boring.

But if you're gonna be active in Switaly, you need decent cardio.  If you're going to do any biking, hiking or pretty much anything else outside, there's a mountain to climb.  I could have joined a gym, but being Switaly, those are expensive and make me feel like a hamster on a wheel.   And I'm also a fan of multi tasking, so since I have a high energy dog, I'd rather kill two birds with one stone and exercise her while I'm exercising.   So it was by default that I started running.

I enlisted my friend Iphone into the process and downloaded an app.   I wanted something approchable and wouldn't make me feel like a loser for not being able to run.  I ended up with couch to 5K.   Though I'm no couch potato, I figured if I'd aim low, I wouldn't be disappointed.  I was right!   It started out easy enough, jog for 90 seconds, walk for 60 seconds.  I had no time to be bored and was able to get a bit of cardio in.   Every other workout gradually builds up.  Next thing you know, I'm running 2 minutes, then 3, then 5.  Now, 5 minutes of continuous running might not seem like a lot, but if you've never done it, it feels like quite an achievement.  And I'm living proof, your heart won't ACTUALLY explode from running.

This week, it's a big jump.  This week it goes to an 8 minute run and then next week, a straight 20 minutes.  I've heard about this runners high and endorphin release blah, blah, blah.  I don't get any of that.  Right now, I only look forward to the run ending!  I'm week 5 into the 8 week program, and now I'm doing it, just to get to the end of it.  But I already have my eye on the 5-10k app so I guess it's working!
Posted by Katherine Correia at 12:41 PM 1 comment: