One of the more bizarre things about living in Switzerland is laundry day. Never in my life would I have imagined that laundry would play such an integral part of my day to day living.

In Switzerland, using a common washing machine/dryer is normal, but what's not normal is the fact that when you move in, you're allocated a time slot. And having a desirable laundry time slot makes all the difference to your social calendar.

When I get together with friends, there's a lot of talk of laundry. As in "oh, can't on thursday, it's my laundry night" or "I'd love to, when I'm finished my laundry".

In north america, this would be considered a blow off. In Switzerland, it's a genuine reason for not being able to attend something. When a colleague first moved into her flat, her laundry slot was Wednesday mornings. Laundry times are issued regardless of need for work or personal preference. So, my collegue actually had to be late for work for the first few weeks because she'd otherwise miss her laundry time. True story.

My laundry day is Sunday morning. As one of only two residents living alone in my building, I have to share a day. Because I've had a bunch of travel this summer, I've missed a lot of laundry time! Thankfully, most people in my building are pretty flexible and have let me encroach on their laundry time or have been willing to negotiate. Well, at least I think they have since my negotiating is done in charades, hand gestures and my Italian translation app on my phone.

You say "why not go to a laundromat?" splendid idea and one that I'm not opposed to. However, for whatever reason, the laundromat is not a concept that has made it to this country. In Germany, they were everywhere! Here? We have great watches and chocolate, but laundromats, forget about it! 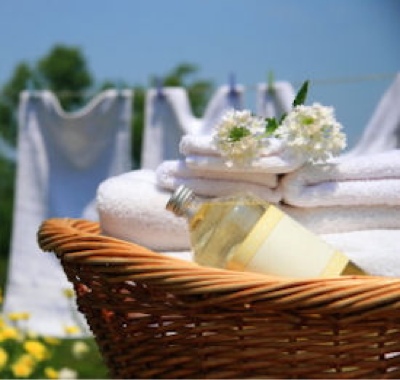 Posted by Katherine Correia at 10:35 PM No comments:

Because I work in the outdoor industry, a couple of weekends ago,I had a chance to be part of the ultra trail du mont blanc. If you know nothing about trail running (like I did before this weekend) it's the Mecca of trail running. Kind of like the Boston marathon for runners except on crack. For starters, the utmb (for short) is equivalent in distance to 4 marathons. And instead of boring pavement, you run on trails, thru the alps and thru little french villages. Yeah, I couldn't wrap my head around it either so in order to prepare for my role in this event, I researched.

The utmb has been going on for 10 years. The normal route crosses thru France, Italy and Switzerland. It's 166km in length with a positive altitude gain of 9400 meters

For obvious reasons, you can't just decide on a whim to take part. To take part, you have to qualify by doing other races throughout the year. Because the weather can be unpredictable and the nature of the terrain, a runner must be self sufficient. That means that they have to carry enough food, gear, headlamp, batteries etc should things go sideways along their journey.

Now. I'm active but I'm not built for running. One of my mottos is "I don't run unless someone is chasing me" I blame it on exceptionally tight hip flexors and a high arch. You can blame it on laziness. However, I "do" know what it's like to travel a great distance thru the mountains thanks to my Yukon adventure. BUT, if you told me that I would have to run the entire distance that I travelled in the Yukon in less than 24 hours without any sleep and surviving on little food. I'd bitch slap you. No questions asked. So the fact that I took part in it is more than a little ironic.

And my role? To be part of a support crew for one of the runners my company sponsors. Kind of like a pit crew. My runner was Helen.

Helen is a lovely slight little blond thing. I first met her at the briefing for the runners and their supports 6 hours before the start of the race. The first bit of news was that due to an absolute crap weather forecast which included snow and winds above 50 km/h the route was being changed. And shortened. From 166km to 103km. While the other runners voiced their displeasure at this sudden and drastic change in course, Helen told one of the runners "sometimes, you just have to roll with it" immediately, she gained my respect.

Once we had details on the new route her support team (me, 2 colleagues and her husband) sat down with her and drew up a rough plan about how we could best provide her with support along the way.

She told us that she was pretty low maintenance and since it was "only" 103km she wouldn't need much assistance. For the first 50km or so, she might not even need a top up of water and would be fine with only the power gels in her pack. Again. Amazement.

7pm came and off she and the other 1799 runners went. Even though she didn't "need" it, we stopped at the first stop 20km in. By this point it was pouring rain. A lot of spectators were still along the trail in the village cheering the others on. The atmosphere was great! It was a Saturday night in a tiny French village in the alps and the air was electric!

2nd stop also ended up being 3rd stop since the route change so we were going to be there a while. We cheered Helen on as she made better than expected time to this checkpoint. By now it was around 11pm and the crowd was thinning out. Also, we were starting to get cold. Bone chilling cold. You see even outfitted in a down jacket and long johns, it was freezing. But no problem, we were a creative pit crew an kept warm with some mugs of French hot wine.

By the time we left that station and onto the next, it was 2am. Helen was going to be running thru the night. I kept having visions of that part in the Forrest Gump movie where Forrest just started running and didnt stop. I wonder what moved these people to run. And run. I've heard about runners high, but this was crazy!

So at 3am, while Helen was about halfway thru the race, I crashed. At 8am I woke up again to do my part and cheer Helen on. At this point, there was only 15km left of the race. When Helen checked in she wasn't feeling well. She said she had been throwing up on the trail. So us support team did our part and cheered her on. Why let vomitting stop you now when you're 90% there? We fed her some sips of chicken soup and she was off.

I should also mention that at this same station, there were some
Medical instances. One lady, a doctor from France got
Pulled off the course because she had hypothermia and needed medical care. Another one of the sponsored runners, lost his vision from over exertion.

It's safe to say that for the whole
Event, I was in awe. It was a mixture of insanity and inspiration. These people had been training for the better part of a year, and when they thought they knew the course, it
Changed. They ran thru snow, sleet, rain, mountains and cobblestones. They ran thru dark and sunrise. And thru it all, they ignored the one principle I'd always been taught- listen to your body. I learned that in ultra running, it's mind over body. But I also learned that in the end, the body wins.

An hour later, Helen passed the finish line. And I may have even shed a tear. I may not have run the race, but I feel like I lived every emotion, te highs of making an earlier time, the lows of not feeling enough to push on. I'm really glad I had the opportunity to take part, but is an ultra marathon in my future? Not on your life!!! 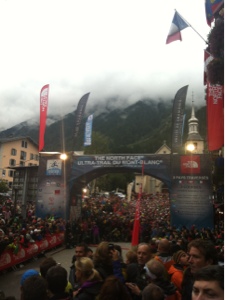 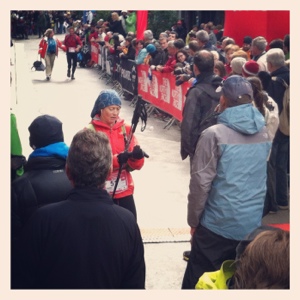 Posted by Katherine Correia at 1:36 PM No comments: