Dancing while wearing a helmet

There are few times in my life where I’ve felt physically unsafe and New Year’s eve in Berlin was one of those times (and I’ve gone skydiving!) Originally, we tried to get into the main area by Brandenburg gate, but by 8pm there were already more than 600,000 there and they stopped letting people in. Instead, we were relegated to the outskirts of Brandenburg gate. We had a great time of dancing and drinking at the little cafes while still being able to see the Brandenburg gate for midnight. However, I now know why 600,000 people crushed into the main area. No fireworks were allowed there. You see, on the outskirts, extremely drunk people were launching fireworks from glass bottles on the streets. It was unlike anything else I’d seen in my life. Random explosive devices going off inches away from where people were standing and cars still driving down the streets (and in some cases, driving over fireworks) I was honestly worried for my personal safety and thought it was just a matter of time until someone got glass debris in their eye or their hair went up in flames a la Michael Jackson 80’s pepsi commercial style. So I did what anyone in their right (sober-ish) mind would do: I bought an army helmet!

2 blocks from the Brandenburg gate there was a store selling random kitsch. In this random kitsch, they had a selection of headware. And in that random selection , I found an army helmet. The irony was not lost on me that there I was steps from the Brandenburg gate in Berlin buying an army helmet to protect myself from explosive devices. Completely different circumstances, I know. But the irony was there.

I had no idea that an army helmet would cause such a scene. People would see me, laugh and knock on my helmet. I should mention that the helmet was metal so this knocking was extremely loud. At one point, a guy ran up to me, manoevered around the metal edge and kissed me on the cheek. He claimed to be a Syrian freedom fighter that had just escaped Syria and he thought it was adorable that I was wearing an army helmet. It was also a hit with a group of American soldiers. If you have a thing for military men, I highly recommend wearing an army helmet next time you go out.

By 3am, fireworks were still going off, but I felt well protected in my army helmet. By that time, I also found myself proper drunk as you do at 3am on New Years eve. So there I was dancing in the shadow of the Brandenburg gate to Beyonce wearing an army helmet and down jacket (it was cold out)

Flash forward to December 15th…. I find myself in Southern Switzerland at a work Christmas party. I also find myself well and proper drunk as you do at a work Christmas party. Our hosts had a climbing wall on their patio and some of us found it appropriate to climb it. At some point, someone had the foresight to equip us with a climbing helmet. After our climbing adventure, we find ourselves dancing again, to Beyonce. So I did what anyone wearing a helmet would do and start dancing along.

I started the year wearing a helmet worried for my physical safety in what looked like (for lack of better words) a warzone. I’m now finishing that same year while wearing a helmet because someone else cared enough (or more likely found it funny) for my physical safety. To say that 2012 has been a crazy year is an understatement: I’ve had 2 surgeries in 2 countries within 6 months, moved countries, switched jobs and escaped Germany with the threat of a lawsuit from my former employer, so I’m taking the fact that I ended my year the same way it started but for much different reasons as a good sign. You better be good 2013, I have high hopes for you. 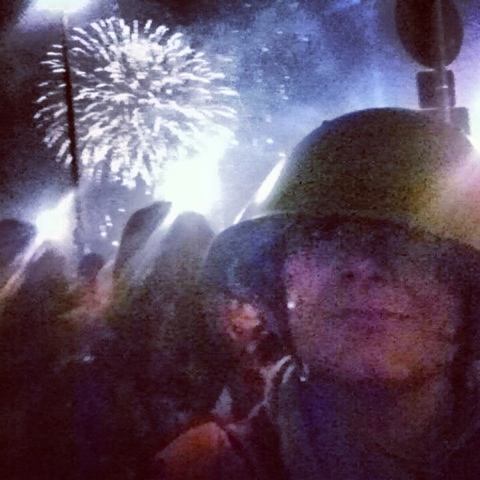 Posted by Katherine Correia at 5:46 PM No comments:

Canada is not a great white tundra

Whenever people hear that I’m from Canada, they automatically assume I’m used to cold and snow.  God forbid I complain that it’s a little cold, I inevitably get “But you’re from Canada!”  and my response is usually “yes, I’m from the part of Canada that had to ship snow in for the Olympics”    Yes, the majority of land mass in Canada is freezing cold in Winter, but not many people live there.  It’s called the arctic and a good reason why 90% of us Canadians live as close to the US border as possible.  It’s less cold (also our neighbors have cheaper gas and booze)

I was born in Montreal and yes, it was cold.  Really bloody cold.  3 feet of snow and -15C cold.  But for 17 years I lived in Vancouver.  Glorius temperate Vancouver.  Yes, Vancouver is still Canada but it rarely snows in Vancouver (I swear!)  and when the odd time it does snow, it’s great because there is usually mass panic and the city shuts down.   In my 17 years in Vancouver, I can count the amount of times there was more than 5 cm of snow on the ground on my hands.  But when it’s happened, it’s been memorable!  Like the time in 2000 when my family and I wanted a white Christmas and rented a cabin a few hours away where there was sure to be snow: it snowed 20cm in Vancouver and we could barely leave the city!  Or the time in 2008 when it snowed and we could actually toboggan down some of the hills.  In Vancouver, when more than 5cm of snow is forecasted, there is a snowfall warning and people cancel plans, stay off the roads and get ready to hunker down for days at home.  In the winter of 1998 we had 30cm of snow and pretty much all grocery stores, businesses and transit were shutdown for 3 days.  I swear.  YES, this is in Canada.   Of course some of us from the rest of Canada laugh at Vancouver’s snow antics, but after 17 years, I got used to it.  If there was more than 5cm of snow on the ground, you could count on getting sent home early from work.   Yes, Vancouver is an hour and a half drive from some of the best skiing in North America and there is lots of snow in the mountains, just none in the city.  Just the way it should be!  Most weekends in the winter, I would head for a 20 minute drive to the local mountains, snowshoe or ski in a winter wonderland and drive back down to a snowfree city.   Perfect really.

Flash forward to my first winter in Europe. I thought I was going to die.  Not only was  it-20C and there was not a drop of moisture in the air (instead of snow, we usually get 5 months of rain you don’t have to shovel it and it keeps your skin moist year round) .  My skin felt like a lizard and no amount of clothes could keep me warm.  My colleagues couldn’t grasp the concept of the Canadian complaining about the cold.

This winter I live in Lugano, Switzerland.  When you think of Switzerland, you think of snow and the Alps.  And there is plenty of snow in the Alps, but drive south of the Alps, and you leave the snow behind.  Again, the way it should be: mountains, snow! City, no snow!  (Until today when we got a few centimeters but that looks like it’s going to melt away any minute)

So when you think about Canada and Canadian, understand that not only do we NOT live in igloos, chase wild buffalo, ride a snowmobile to work and ice fish, some of us also aren’t used to the cold and snow!
Posted by Katherine Correia at 12:05 AM No comments:

One of the things I've noticed about living in Switzerland is that sometimes, things seem a little... too artifical.  As in artifically perfect.  A little bit like Disneyland. Calling Switzerland the the happiest place on earth might be going a bit far especially for a cynic (aka realist) like me.   However, it seems like daily, I'm blown away by something or other which reminds me of the happiest place on earth.

Like for instance, Lugano has these really unique trees.  I'm no botanist, so I can't tell you what trees they are.  And they're probably the most generic trees around, but what makes them different is that they are pruned just so.  They have thick trunks and thick branches and in the spring, little branches grow off of them and they are these cute bushy things.  Now in a "normal" world, they would just grow and become normal trees.  But in Switzerland, they're pruned so that the new regrowth is trimmed each year to keep their unique shape.


And then there's the garbage. Yep, who knew that garbage would be something to write home about, but it is. Literally. I lived in Vancouver for 17 years and I know garbage. In the time I lived there, the garbage workers were on strike at least 3 times. The garbage in Vancouver is worth fighting about. Again, literally. Most apartment buildings in Vancouver have to deal with communal dumpsters. And our garbage must be pretty valuable because there are constantly people pilfering thru it. Alley pirates, Dumpster divers, whatever you want to call them. Beyond the fact that it's heartbreaking that Canada, a first world country can't support it's addicted and mentally ill, it's annoying. There have been many sleepless nights due to them rolling their (illicitly taken) shopping carts down the alleys and the pirates getting in fights with each other or god forbid, they fall asleep in the dumpster and get scooped up by the truck (it happens, I swear!) Here, in Switzerland, garbage is a clean, organized event. You go to the corner, drop your bag in the required slot and it goes underground into a nicely contained pit. No fuss, no muss and amazingly, no smell!

Of course, there's a lot more than garbage and pruned trees.  Such as that there are still paid crossing guards at school crossings (I haven't seen a crossing guard since Cyndi Lauper was on the charts...)  All the local parks have free public washrooms and they are shockingly not graffitied or smell like urine.  What's shocking is that all of this, and I pay half the taxes I did in Canada and less than half what I did in Germany.