Long story short, I had prearranged to meet someone in Barcelona.  That someone didn't live in Barcelona but we were both there at the same time.  I didn't know much about this person and it turns out I didn't need to.  He had emailed me a picture of himself, but again, I didn't need one because he really didn't look anything like his picture!

We had loosely arranged to have dinner on one of my nights there.  Since we had been in touch and had some things in common, we were eager to meet.  However, we both had plans.   Again, long story short, we ended up meeting at 1am in front of Gaudi's LaPedrera and took it from there.  Romantic you say?  Yeah, well I'd have thought so too, but this is my romantic life we're talking about!

He had been out with colleagues and had had a bit to drink.  No problem, I had just finished meeting my friends and we had enjoyed Sangria at a few places along the way.  Now, trying to find somewhere open at 1am is another story.  I thought Barcelona was a city that doesn't sleep, turns out at 1am on a Tuesday, it sleeps.

We did find a bar that was open though.  It was a random bar with no one in it for the first few hours, as time went by, it turned out to be a gay bar frequented by guys with a lot of mullets.  So ironic that we ended up in a gay bar with the worst dressed men in all of Barcelona!  But I digress... we got chatting over a mojito.  And though he didn't look like his picture, I didn't consider it a big deal.  We had a good if tipsy conversation and toward the end he was getting a little touchy-feely so I was picking up "he's into me vibes".  It was all very normal.  Well, as normal as a first date in gay bar in Barcelona at 1am can be...

Flash forward to the next day- our original date date.  He texted me throughout the day about having a bad day, being tired, blah, blah, blah.  I gave him a way out by saying we didn't need to meet for dinner, no sweat (well, a lot of sweat actually since it was 42C in Barcelona!) "no, no" he said, he definitely wanted to do dinner.  ok, fine.

He set up the time and the place.  He shows up for dinner (late but no biggie)  I'm reaching for conversation, understands he's had a bad day so I'm struggling for banter.  I don't know where his personality went, but clearly, he left it at home.

The best was when the bill came.  Now when it comes to dating and the bill, I'm a bit torn.  But I've also accepted I'm a bit old school.  Whenever I get invited on a date (the once or twice a year it happens!)  I always prepare to pay my part.  That being said, to me if a a guy offers to pay it signals that he's enjoyed himself and would perhaps like to see me again.  If this happens, I'm always grateful and happily pay the 2nd date (and if he pays the 2nd date, well if he's really lucky and worthy, I just might make him dinner)   Anyways... the bill came and there was no move.  Having only a credit card on me, I slapped my card down.  Radio silence on the other side of the table.  oooooook.   The waiter comes, I pay.  The best part is, he then grabs the receipt and says "I'm just gonna take the receipt ok, so I can get reimbursed from work".  There are few times where I'm left speechless, but speechless I was.   Wait a minute- you just got your dinner bought for you AND you're taking the receipt so you can get reimbursed from work???  so you're actually MAKING money by going out to dinner with me?!?!?!  well in my head, that's what I said but in real life, I said nothing cause I was speechless.

I should also mention that said fellow was Scottish.  Now I KNOW that "they" say that Scottish people can be cheap but there's nothing more I hate than stereotypes.  Oh wait, yes there is, when someone lives that stereotype!
Posted by Katherine Correia at 6:14 AM 2 comments:

It's hard to imagine sometimes the twists and turns that life makes. What's even crazier to imagine is that as shitty as things can get, they can quickly turn around (and sadly vice versa).

In April, my life felt like a bad country song. No really. I had just had emergency surgery, was healing from complications from it, the employer I was leaving was being an asshole (an understatement really), I was having a hard time extricating myself from Germany and I had just broken up with a guy I really liked. The only thing short of my life being a country song was that my dog didn't run away. Thank god.

Flash forward to August. I live in a new country which is a lot easier to adjust to and I work for a new company and love my position. A few weeks ago, I went to portofino for the weekend. I planned a BBQ on the lake with two dozen new friends and colleagues this past week. I'm meeting a friend in barcelona that I haven't seen in 12 years. And I have a work trip to chamonix.

I haven't exactly moved onto cheesy inspirational song territory, and I wouldn't want to. But I am enjoying getting over April by the changes August has delivered me. I've never been a fan of country music and when life suddenly became one it was torture, but I'm sure glad it was short lived!

Posted by Katherine Correia at 10:47 PM No comments:

This past weekend, I went to Portofino. Portofino has long been known as the playground for the ultra rich. You know you're spoiled when you go somewhere like portofino and come out a little disappointed.

Yes, disappointed at one of the highlights of Italy. Let me explain... In the past year, I've been really really fortunate with travel. I went to Tuscany and was blown away by the beauty and charm of Lucca & Sienna. Last September, I saw the best of Cinque Terre right before the floods hit. All of those times I struck gold with really cute inns and agriturismos and amazing food and wine.

So I had big expectations for Portofino. Perhaps unfairly so. And it didn't really deliver. Portofino seems to get by on it's reputation rather than earning it: The food was way overpriced for what it was and our choice of hotels wasn't big and also way overpriced for what they were. And I say this living in switzerland. The land of everything overpriced! That being said, thanks to random diners at the next table over, I had a uniquely portofino experience.

My friend and I were quietly minding our business and griping about our overpriced meals, when the next table over struck up a conversation with us. Giorgio and Gianni (not their real names but I'm too lazy to verify and I'm pretty sure I'm not far off) spoke excellent English. It may have even been my dog that started the conversation. She has a tendency to do that. (well not the actual conversing, but her very presence inspires conversation) The conversation started innocently enough and for the first hour I thought they were gay. After a year and a half living in europe, I still have a hard time deciphering "euro" from "gay". One thing was clear, these guys were rich. And not just a little bit rich. They both talked about their homes in portofino, How they loved to sail to saint tropez and visit their friends with villas in Lugano. To be fair, they could have been making it up, but it didn't seem like it.

At some point, the conversation got flirtatious. And it was a lot creepy since they were older than my parents. I didn't let on how old I was cause I'm sure that would have been a turn off. Since my friend is taken and I was fascinated by this scene, we started prodding them. Giorgio, who is currently developing private airports in china, went on about no matter how successful you were, it was "necessary" to have a young pretty girl on your arm. According to him, this was the mark of success. I tried to dispute this with him, but we were getting nowhere.

Gianni, the jeweler, was a lot more down to earth. In addition to the jewelry shop that had been in his family for a long time, his main business was in trading diamonds. When I prodded if he had any clients I'd know, he claimed he had recently sold jewelry to Paul Allen. It all seemed very James Bond to me and it was humorous to get a glimpse into this world.

I could see how some girls could find Gianni and Giorgio charming. But at the end of the day, they were over 60. Giorgio said how he wouldn't date a girl older than 26. Riddle me this: how can ANY 26 year old girl have anything in common with a 65 year old man? All I think about is the sex and the city episode where Samantha sleeps with the old man. He may be rich, he may be charming, but when his clothes are off? That's still a saggy old man ass you're looking at.

In a world where most of us look for meaning, it was wild to see how shallow life can be. Giorgio and Gianni were clearly successful in business, yet their priority was to land the hottest and youngest pretty thing. They griped about how Portofino needed the "right" tourists. Not the ones that bought gelato and came in on cruise ships but ones that came to buy rolexes and cashmere sweaters. It was clear we were worlds apart.

Towards the end of dinner, Giorgio and Gianni gave me their cards and told us to be in touch. What, pray tell would they want from a 39 year old woman with far more Zara in her closet than Gucci?!?!

When it was time to pay the bill, we were told that our money was no good there and our bill was taken care of. Portofino may have been a disappointment to visit, but I sure felt like like I had the right Portifino experience by having dinner bought for us by two Portofino playboys. In the end I wonder who has the recipe of success. 2 old(er) men whose main goal in life is the younger hotter arm candy? Or 2 late 30's women trying to live their life with meaning and hope for "true" love. Whatever THAT means. In the end, time will tell. 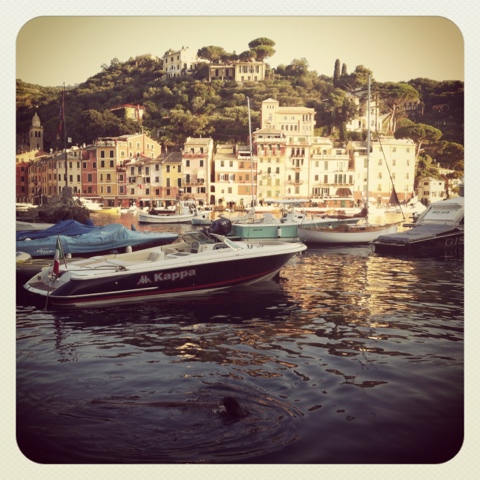