One of the things I was looking forward to about living in Europe, was all the endless possibilities to discover and travel around Europe.  Other than a few visits to my friend in Frankfurt and a trip my grandmother took me on when I was 6, I haven't seen Europe.

This weekend being the first long weekend since I've been here, I've planned a trip to head out and explore.  It was hard deciding where to go first.  The great thing about Nuremberg is that there are endless places to go within a 4 hour drive.
In the end, I decided to go to the Dolomites and do some hiking and exploring.  This picture is what sold me: 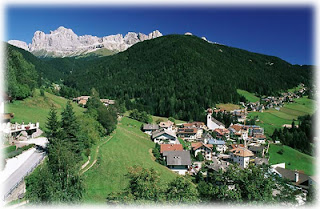 It seems quintesential "europe": cute village, amazing mountains and rolling hills.  I'm going with a girlfriend and my dog.  We're looking forward to exploring, hiking, cappucinos on patios (and maybe getting hit on by cute Italian men) and delicious food.

One of the things I always like to check out when going to a new area, is a spa or massage.  Thai massages in Thailand, Ayurvedic massages in India, hot springs in Costa Rica and a painful massage in China are some memorable adventures.   When I looked into spa treatments in the Dolomites, I came across this: 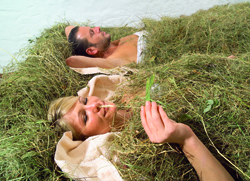 "this" is a hay bath famous in South Tyrolia.  A hay bath is meant to be relaxing, rejuvenating and can help some skin issues.  And all I can think of is "ick."  Not only do I have a wicked grass allergy that would surely give me hives, leaking eyes and nose, but I can't imagine this being relaxing (histamine overload aside)  wouldn't it be itchy as hell?  Part of me is tempted to overload on the anti-histamines and try it out of curiosity, but I fear I'll be picking hay bits out for days!
Posted by Katherine Correia at 12:13 PM No comments:

The first major language slip up

It was bound to happen.  When you learn a new language, you're bound to somehow make a food of yourself.  I remember being in Bolivia in 2000, learning Spanish and was finally feeling comfortable enough to order a meal.  I was so impressed with myself that I made it almost all the way thru.  And then, when the waiter asked me something I didn't know, I just smiled and nodded. I figured that would get me thru.  It turned out he was asking me which part of the chicken I wanted.  oh. The breast.  But I had no clue how to say breast, so, in a panic, I pointed at mine.  Well, it made Mr. Bolivian waiter's day.  I've never seen a waiter laugh so hard in my life.  Lesson learned, I'll never forget "pechuga" as long as I live.  But I thought that was all behind me.  I. was. wrong.

After over two months in Germany, I've picked up some German (my daily work is in English, though my collegues are all German and speak it regularly) but I still dread talking on the phone and avoid it at all costs.  At least in person, if anything goes wrong, there's always charades to resort to. But the time had come for me to buck up and talk on the phone in German.  I called the doctor's office to see if I could change my appointment to an earlier time.  Turns out, I hadn't properly thought thru what I was going to say.  What I meant to say was "I would like to come earlier".  I managed "I would like to come" and stopped.  I realized, I had NO clue what the world for earlier was!!!!! ooops.

I was really, really hoping that the sentence didn't have the same connotation in German than in English, but when I told my collegue what I said, she killed herself laughing.  That could explain why the receptionist put me immediately on hold for a few minutes....
Posted by Katherine Correia at 12:10 PM 1 comment:

Because the past few months have been so hectic, I haven’t had time to keep up my regular exercise regime. Now that I’m finally settled in, I’m tackling getting back into shape.
Since gyms generally overwhelm me, I tried looking around for pilates classes. Last night was my first class.

I was a little overwhelmed going to a pilates class since I haven’t been in about 3 months and a lot overwhelmed that the class was going to be in German. At the beginning of class, I awkwardly told the teacher (in my Geman which sounds like a 2 year olds) that I’m new and only speak a bit of German. He asked me where I was from and said “Canada”. And that’s when the fun started.

For the most part, following along in Geman wasn’t to bad. After all, I could look at the instructor or the other students. At one point, I thought he said something like “pretend you’re eating a lemon”. I just figured maybe it was a German figure of speech or I misheard. I was wrong. He came around and demonstrated what “pretend you’re eating a lemon” was and so I tried hard not to burst out laughing.

While we were doing some sort of dry humping the ground move, he decided to get the class engaged and start a discussion on Canadian singers and having the class blurt out all famous singers from Canada. While dry humping the mat. Yeah.

Then, while we were doing some thighmaster move, he decided to starting singing, in full, Celine Dion’s “My heart will go on”. I told him that though Celine Dion is Canadian, us Canadians are more than happy to give her away.

Oddly enough, I did appreciate his odd sense of humor and his “Pilates Polizei” cracks. It made the fact I hadn’t worked out in 3 months seem less painful.

There are 10 more classes to go. I hope as hell that Frank the pilates teacher Canadian trivia doesn’t go for 10 more classes….
Posted by Katherine Correia at 10:46 AM 1 comment:

German Efficiency and other myths

If you’re like me, you’ve probably heard mention about how (generally) Germany is a modern and efficient country. My German grandmother (god rest her soul) used to go on and on (& on) about how things were so much better and made more sense in Germany than in Canada. Well, now that I’ve had a few months experience I share my thoughts on this.

For the most part, I’m convinced that this “German Efficiency” is a myth. I realize this is a sweeping generalization and depends on personal experience, but I’m convinced that Germany has hired a fantastic PR firm to send this message out to the rest of the world. While some things make sense, some things are utterly ridiculous.

My main beef with German efficiency is the traffic lights. I’m truly amazed at how many traffic lights there are and the length of them. Because I’m ridiculous, I’ve taken to timing them and tracking the distance between each traffic light (don’t judge- it gives me something to do other than going postal while waiting in traffic) The average length of a traffic light is a minute and about twenty seconds. The average distance between each traffic light is about 500m. Probably just a little bit longer and a little bit closer together than most major city. No big deal. The frustration starts to happen when you realize that the lights are not timed. In most places in North America, you can usually count on a “green wave” that is, if you drive the speed limit you can “usually” catch most of the lights green. In Nurnberg, it appears to be the opposite. You wait your almost minute and a half, drive 500 meters only to get the next red light. And on. And on. It’s even more ridiculous because the amount of stop lights is baffling. When there is no intersection: stop light. When there’s a pedestrian crossing; stop light (no, NOT a pedestrian controlled light) The street I drive on to get to the autobahn (and drive 200 km/h!) has about a dozen traffic lights.  So I spend a lot of time waiting in traffic.  Well, there's not really traffic, I guess the lights are that long to wait for enough of us to gather to wait for a traffic light)

Another thing that amazes me, is how traditional and religious (again, GENERALLY) the state where I live (Bavaria) is. For instance, though you can visit a (legal) prostitute and gamble on Sundays, you can’t go grocery shopping. Why? Because Sunday is the state designated “family” day and it’s against the law for grocery stores etc… to open.  Until 2003, shops were legally mandated to be open only until 6pm weekdays and until 1pm on Saturday.  Though my work is an exception, women delaying marriage and family for careers still seems to be a rarity.

Speaking of shopping, there are a lot of cool shops on my street. Little unique handcraft shops that make everything from baby clothes, to custom printed bags to purses and dog treats. I would love to check them out. However, so far, that’s proved impossible. Though these shops are located on a really quiet residential street, most of the shops open only until 5. And not on weekends. One of the stores is even only open on Mondays. And only between 3-6pm. They even have a sign up that they’ll be on holidays for the entire month of may! (I guess they need a holiday since their work hours are so stressful?!?) So the times when most residents could ACTUALLY go and support our local shops, it’s nearly impossible. I. just. Don’t. understand.

Another example I’ve found is doctors. The doctor I’ve found so far is male. However, as soon as I made any mention of any female issues, he interrupted me and told me I had to go to a “female” doctor that specialized in “female” needs.

Don’t get me wrong. My experience so far hasn’t been terrible. It’s just been “interesting”. Sure meetings start on time and you’re frowned upon if you’re late, but jay walk across a street and you’ll all but get told off (another typical German trait- passive aggression. No one will likely ever say anything to you, but you’ll get eye rolls and dirty looks)

Life in Germany is very much about “following the rules” and question nothing. If there’s a rule on something, it must be followed. There doesn’t seem to be a rule on queuing though. Go to any store and try to form a line to wait and pay and people look at you like you’re crazy. It seems to be a free for all, whoever can get to the front wins sort of motto when it comes to lining up.

So far, I’ve managed with the rules but it hasn’t been easy. My personality naturally wants to question everything and follow only the rules that suit me. I suspect this will land me in trouble someday. In the meantime, I just smile when I get dirty looks when I jay walk!
Posted by Katherine Correia at 4:04 AM 6 comments: