When life hands you wasserschaden, head to Tuscany! 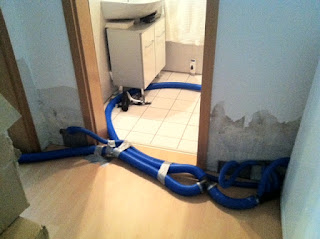 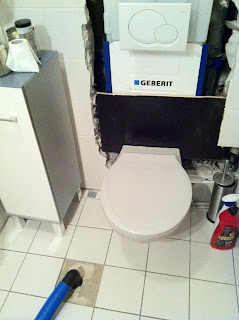 It all started with the dining room chairs. I had ordered them 2 months prior and was eagerly awaiting their arrival. It was the LAST thing I needed to complete my place! After nearly 6 months of transitioning (getting rid of old stuff, moving here, setting up, getting new stuff) the dining room chairs were the last step.

I dragged A with me to the store and we picked them up and carried them up to my place. We opened up the box and my face fell! Instead of the modern white moulded chairs with chrome legs and faux leather built in seat cushion it was this black leather and black/white heathered monstrosity.

I enlisted A’s German boyfriend to help. The next day he got on the phone to them and explained the situation. Long story short, yes, they gave me the wrong ones and I had paid in full for them, but they don’t know when the right ones are coming. And so they sit, in boxes in my hallway.

Since then, my place has been in chaos. Or, as the Germans call it “ein katastrof” the damage from the broken pipe is worse than they thought and so after a handful of workers have come and inspected the situation, I have walls ripped up, no stove or oven, pipes and dryers all set up in my house. When I came home the other day, I just stood in my apartment in shock. How? Why? Really??? I was so happy to be settled in and now I was living in a construction zone! After having a little cry (after dealing with relocating, I thought I was done the stressful stuff) I convinced myself it wasn’t the end of the world. Emailed my landlord and started negotiating for compensation (German tenancy laws are great that way)

And then, from nowhere, a silver lining appeared…

A girlfriend emailed me looking for a road trip partner to Tuscany. She had a free place to stay but no one to go with. Did I want to join? UMMMMM… YEAH! So instead of dealing with fans, landlords, moisture, mould, no stove (always a great diet plan- no stove = eating salads every night) I’m leaving it all behind for 5 nights in Tuscany. Ahhhhhhh…..
Posted by Katherine Correia at 4:09 AM No comments:

The start of beerfestival season 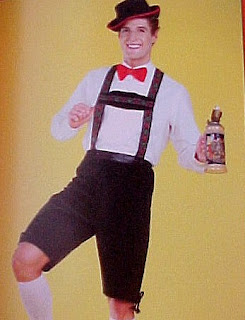 As almost anyone knows, Germans love their beer.  And so do Canadians.  So it's not without irony that this Canadian, living in Bavaria does not drink beer.  It's not that I don't drink alcohol, I socially engage in wine and other cocktails, but beer turns my stomach. literally.  The smell, the carbonation, everything about it.  But I love a good party more than I dislike beer and so with that, I'm going to my very first beer festival.

From now until the end of September, there are literally hundreds of beer festivals.  Every town and every neighborhood have their own little (or big beer fests) The biggest (and most touristy) being Oktoberfest in Munich.

My first foray into beer festing, will be the Erlanger Bergkirchweih.  My friends have given me an idea of what to expect and given the descriptions, I'll want to stay sober for it.  The Erlanger Bergkirchweih is one of the biggest beerfests.  I've been told that it's basically Oktoberfest without the tourists.  It seems like it's the kitschy-ist of the kitsch without irony.

To get into the spirit of things, my girlfriends and I have decided to get proper beer fest "outfits".  So earlier this week, we went shopping.  Specifically drindl and lederhosen shopping.  The best part about this is that here, these are not "costumes" but are actual outfits still worn regularly at such beer fests.  So, we bought our outfits at a regular department store and man, it did NOT let us down.  I did have my heart set on a drindl, but sadly my body shape was not meant to be dirdnl-ed.  It seems that I'm heavily lacking in the top department to make a dirdl proud.  And so, I settled for a kitschy pair of brown lederhosen complete with suspenders and checkered shirt.  The thought of wearing leather pants in June seems daunting, but thankfully the weather is calling for cooler temps.

I can't wait to get dressed up in my leather outfit, eat gigantic pretzels, surrounded by oompa bands, cheesy 70's band tributes, amazing people watching and drunken Germans.  It's sure to be a highlight of the summer.  I just hope that I give my lederhosen a lot more coolness than this guy!
Posted by Katherine Correia at 2:33 AM 1 comment:

Well, it was 4 months last week since I've been in Germany.  I've been making a "bit" of progress on the language front.  I've had a couple more German classes and we're now on the highly dreaded "der, die, das".  Being able to speak French, I get that some languages have a (non-sensical) masculine and feminine distinguishment of nouns.  In french, the garbage is feminine and the book is masculine.  It makes no sense.  But since I learned it and was schooled in it as a kid, the distinction becomes second nature.  But now in my (ahem) late 30's, and picking up a 4th language, it's a lot harder.  Add to the fact that German has the added "bonus" of a "neutral" article.  Good lord.  And of course, there is no rhyme or reason to why things have der, die or das.

So far, my German has been on a need to know basis.  If I need to know something, I look it up and practice it before I have to say it.  This works particularly well in stores where the request is simple and I won't be left staring blankly after their response.  I've been particularly sucessful with "Haben Sie?"  (Do you have...)  I've learned a lot of words this way; like rauchmelder (smoke alarm),  reiningungsprodukte (cleaning products and a ridiculous mouthful) and knochen (bones- what? I have a dog!)

I'm getting to a point though where I have a repertoire of a few (very few) sentences.  Because they're the only ones I know, I say them all the time and so am starting to be "believable".  The issue with this though is that people assume since you know these words, you must know more and so they babble on and on at full machine gun speed.  And I'm left staring blankly.  I go with the hope I can recognize a word, body language, hand signal, ANYTHING that will make me understand what they say.  My usual response is "I'm sorry, I only speak a little German" and theirs is usually "ahhh but you speak so good".  Yeah.  When you say the same 10 sentences over and over again, they start to roll off the tongue.

Since my German is so basic, I only know the present tense for everything.  It's interesting really.  It's like I have no past or no future.  only now.  I can only (sort of) tell you what I'm doing.  Not what I've done or will be doing.  In principle, it's not a bad place to be, but I can't help but feel like a 3 year old trapped in a late 30's body.
Posted by Katherine Correia at 10:26 AM No comments: