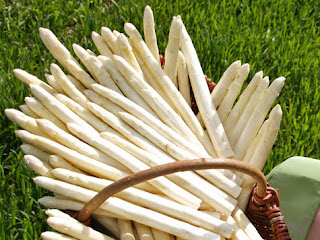 When I was interviewing for the job I now have, I did some research on Nurnberg and if it was a city I thought I could live in.  Surprisingly, according to wikipedia, the stats are pretty comparable to Vancouver.  Population:  Nurnberg  503,000 Vancouver 578,000.  So I thought it wouldn't be too much like living in a "small town".  And for the most part, it's not.  There's a good selection of international restaurants (including more thai restaurants per capita in the Western world!), a few decent bars and I can pretty much get a hold of anything I need.

However, the proximity to the "country side" here is as close as the wilderness was to Vancouver.  The city is surrounded by farm fields.   My office faces endless fields of canola (or rapeseed as it's called here, but I find canola a much better word)  My drive to work each day is like driving thru a salad.  Literally.  There's the red lettuce field, the green lettuce field, the rucola field, the green onion field (the most random, cause it actually smells like green onions when you drive by) and the garlic field.  Oh, and the endless spargel fields.

Spargel is white asparagus.  A delicacy in North America, but literally everywhere here that it starts to turn your stomach.  My friends had warned me that when it was spargel season you'd know, because it'd be EVERYWHERE. And let me tell you, they weren't exagerating!  On my way to work, there's at least a dozen signs advertising "frisher spargel".  Every meal at the cafeteria has a spargel component and hell, even my local big box hardware/home reno store store sells it (they also sell wine, but I digress...)

I've researched this obsession with spargel and all I've come up with is that Germany produces 61% of the world's white asparagus.  The reason it's white is because the fields are covered with sheets to protect it from the sun.  No sun = no photosynthesis = white rather than green (good thing I paid attention in science class! ;) )

It's impossible NOT to get sick of spargel. It's practically being shoved down your throat!
Posted by Katherine Correia at 10:18 AM

Mmmmmm, I *love* spargel season! My husband doesn't quite agree though. I notice the food seems more "seasonal" here than in Canada (I'm from Ontario) and I can't figure out whether it REALLY is more seasonal here or whether I just never noticed the seasonal stuff in Canada...

I just got back from a trip to Amsterdam, Leipzig, Berlin and Munich and spargel is my new nemesis. As you say, it's everywhere and is usually served boiled and whole stalk and is mostly tasteless with horrible texture. I'm not in love with green asparagus, but it is much better than this white junk.