No, Christmas didn’t come early this year! But (with the help of a great host) I went to Cologne for elf elf elf elf. Elf means eleven and each year on November 11th at 11:11am while the UK, US and Canada celebrate remembrance day and those that fought in wars, people in Koln celebrate the official start of carnival season. This year, I had the extra bonus to be there in 2011.


The proclamation of Carnivale season in Cologne is announced by a young virgin, prince and farmer. Ironically, these are all men (even the young virgin) and they pay for their privileges. The major carnival festivities don’t start until February, but I guess it’s kind of a big deal because they need to get in a practice session three months ahead of time.


Carnival is like it is in Brazil, New Orleans and other places. Except in Germany there’s no samba dancers or beads thrown at you. Instead, you celebrate dressed in a costume (clowns and corny costumes are best) and bags of sweets get thrown at you. Cologne is Germany’s biggest carnival and has about 1.5 million visitors.


Like Oktoberfest, Germans take their partying and their drinking seriously. By the time we got to the main party areas at about 1pm, there was a whole lot of drunkness, cheesy costumes and sidewalks and streets filled with broken glass. It reminded me of being at a cheesy Halloween party, except on the street and in broad daylight in the shadow of a 700 year old church!


Also like all good German parties, this was about the drink and like Germany, it’s about beer. Specifically the Kölsch beer. I can’t tell you how it tastes because beer and I still haven’t made up since our 20 year old fall out, but I hear it’s tasty and less hoppy than other beer.

Here are some pics of the elf elf elf experience... 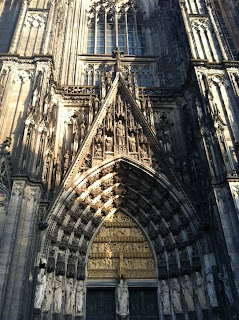 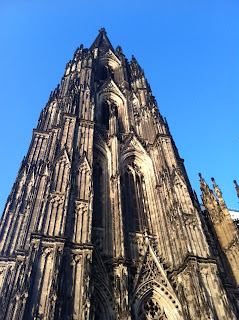 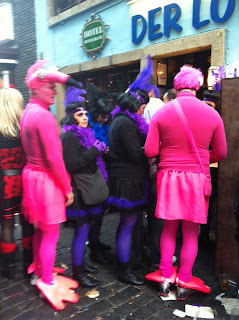 and a discoball, as a helmet... of course! 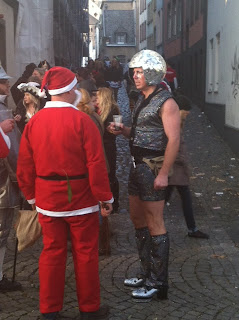 Just because I don't drink beer doesn't mean I can't peel the lid off a wine! 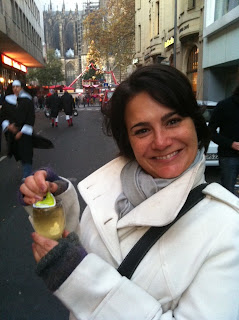 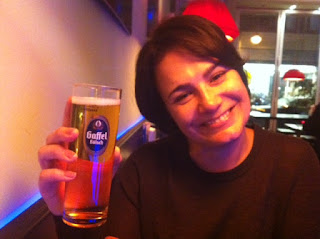 Posted by Katherine Correia at 4:02 AM