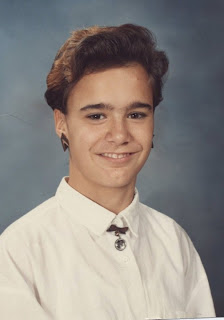 One of the hardest things about moving elsewhere is finding new people to keep up the grooming regime. I’m not one of those girls that need regular manicures, pedicure, whatevercures, but hair management is something that as a half Portuguese woman, requires religious maintenance. For me, that means eyebrows and the hair on my head.
Who doesn’t look back at their awkward years and cringe, but I’d argue that as a half Portuguese woman, I may have had it rougher than less hairy ethnicities. From the age of about 10, my mom decided to shear my mane, much like a sheep. I say shear, because that’s pretty much what it felt like. I don’t know if it’s because conditioner (or crème rinse as my early memories recall) wasn’t invented or if somehow my mother wasn’t aware of it in 1983, but every hair shampoo was equivalent to medieval torture. You see, even then, I had enough hair on my head to make half a dozen middle aged white men jealous. And well, washing without conditioner left my head one.big.tangled.mess. After one too many episodes of combing out my hair and loads of tears, my mom ran out of patience (not that she had a lot to start with) and had me sheared. And so I spent my awkward years being confused as a boy (until I discovered Jodi Watley sized earrings- to me, my earrings compensated the lack of feminity my hair had)

To make matters worse, my Portuguese genes blessed me with the mono brow. My father used to tell me as a child how lucky I was to have thick eyebrows. “Look at Brooke Shields” he’d say, “she has thick eyebrows and is beautiful”. Brooke Shields, I was not. I’m pretty sure that even though she had thick ones, she had TWO eyebrows, a feature my eyebrows were sorely lacking.

And so at the ripe old age of 18, I started the all-important career of eyebrow grooming, or the “welcome to the world of two eyebrows” as I like to call it. In the 20 years of getting my eyebrows done, I’ve learned a thing or two about eyebrows and have tried almost every technique of hair removal. For instance:

My ex landlord was going to electrolysis school and needed a “practice” patient. My mom volunteered me for role (thanks, mom) before I started, she sat me down and told me how a needle filled with electric current was going to remove my hair and (allegedly) it wouldn’t grow back. She also told me that that your nerve centers for pain was located toward the center of my body. The only reason I recall this is because when she stuck the electric needle over the bridge of my nose, I remember thinking “hmm…. You could be right”. I don’t recommend anything that involves electricity. Electrolysis included.

Having been to India five times for business trips, and knowing that many Indian women suffer the same fate as me, I figured threading was worth a shot. I mean, how painful could a piece of twisted cotton thread be, right? A lot it turns out. You see, threading works on the same principle as a weed wacker. In essence, they’re both doing the same job. A lady stands above you with a piece of twisted cotton thread and hopes for the best to graze a few of your eyebrows hairs while leaving your skin intact. Some people swear by threading, but to me, it’s just mowing the lawn, not plucking out the weeds by the roots. And anything that painfully annoying should be permanent. And threading is not.

My preferred method of eyebrow grooming is the wax. But I’ve learned over the years that there’s a lot to be careful of when choosing an eyebrow waxer. Having a lot of um… eyebrow real estate, I want the right landscaper. I don’t want someone who is going to turn my eyebrows into a Mickey Mouse topiary. Over the years, I’ve had my fill of over eager eyebrow groomers and let me tell you, there’s nothing worse than a bad eyebrow job. Waiting for them to grow back in is a long and painful experience. Pluck a few too many hairs and you end up with a perpetually surprised look for a couple of months.

When I left Vancouver, I had a standing every 3 week appointment with my eyebrow lady. I paid for the service a year in advance and I stayed with her for 4 years. Jane gave me the perfect arch. I miss Jane’s arch. Here in Nurnberg, I’m still auditioning eyebrow groomers. So far I’ve tried three. Two were mediocre and one gave me what I like to call “German stripper eyebrows”. There’s a trend in young German ladies to be too tanned, a crystal rhinestone applique on a tooth, 3 pairs of fake eyelashes, too straight hair and German stripper eyebrows. Too thin, no shaped eyebrows with a whole lot of pencil fill in. It’s not a look I can pull off, nor am I eager to. When I complained about my German stripper eyebrows, friends were all curious and no one claimed to notice the stripper-ness of them. I guess it’s that the eyebrow shape is in the eye of the beholder. But in the meantime, my search for the perfect arch continues… again.

Posted by Katherine Correia at 2:16 AM

Hair Extra is exactly as the name says, it is an excellent solution for the hair problem as Hair thinning, fuller hair, Hair loss, Hair loss conceal, Thicker hair . adding more hair to your head naturally and effortlessly, it is a superlative hair loss products. A perfect Solution For Balding .